The Farm250 - is it an answer to agricultural ammonia problems?

Results of ammonia concentrations through the prototype Farm250:

Do these preliminary results show that there could be an effective means of converting volatile ammonia into a stable fertiliser?

Second Year of Operation for the Farm250 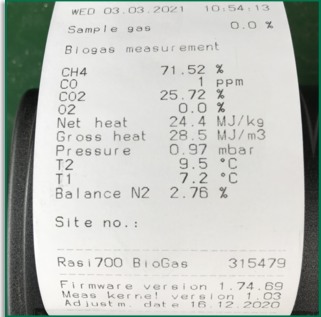 There was a problem finding a suitable gas boiler. This has been resolved by using a top quality engineering and fabrication company with superb customer care:
See www.firsteng.com
(First Engineering Services Ltd)

The biogas, about 70% methane, has a gross energy value of 7.9 kW/m³. The hydrogen sulphide is naturally under 150 ppm, so it can be used directly in most generators and boilers. 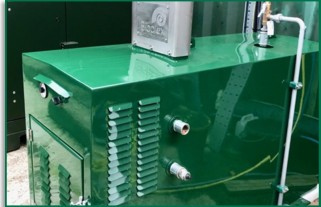 A new bespoke outdoor biogas boiler to heat the digester and nearby buildings was recently delivered.

The novel Farm250 biogas plant has been designed, built and tested over the past two and a half years. Whilst the core biogas plant has operated reliably for about 18 months, the research and development continues with the add-on equipment and the outputs of biogas, fibre and liquor (digestate).

Biogas at 70 to 80% methane is used to fuel a 48v DC generator to charge electricity storage batteries. Both three phase and single phase electricity, via inverters, is used to provide power for the digester site and a nearby dairy farm. The next task is to investigate the separation of biogas in to methane, as compressed natural gas (CNG) and the residual carbon dioxide.

CNG can be transported in cylinders and used in converted road and farm vehicles and for use in engines, cookers, boilers and generators.

Fibre (Fermen8®) can replace peat as a growing medium, can be compressed into items such as flower pots and briquettes. The nutrient levels can be varied for the use of it, several new blends are to be made and evaluated.

The composition of the liquor or liquid digestate from a three-stage digester may differ from single-stage ones, especially the ammonia and sulphur levels. Investigations continue.

First Year of Operation for the Farm250 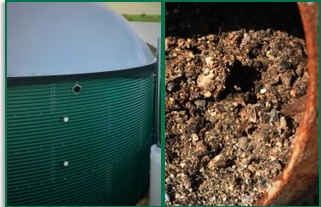 The first Farm250 biogas plant has completed over one year of continuous trouble-free running, fed on dairy cow slurry and farm yard manure in the winter months and pasture topped weeds when the cows are grazing nearby meadows.

The patented hybrid digester creates a steady supply of biogas, with an average methane level of 70% and Fermen8® which is currently in plant growing trials in numerous gardens, allotments and fields. It has been recently noted that Fermen8® also has good moisture retention.

Grit, a problem causing failure of conventional digesters within 4 to 7 years, is regularly and safely removed without interruption to the biological process.

The biogas can be used in equipment supplied by recommended companies; to produce heat, electricity and/or gases such as methane (CNG), carbon dioxide and hydrogen. 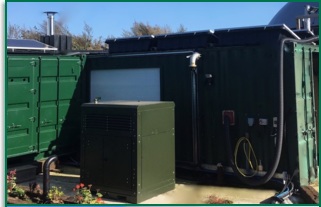 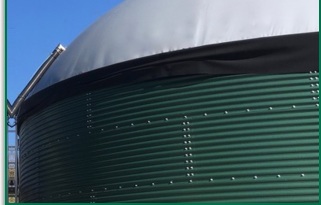 A biogas plant, using the patented Hybrid Digester, for farms with:

A food waste version, to treat and recycle 5 to 10 tonnes per day whilst will enabling the operator to comply with ABPR Cat 3, will also be available.

To tailor the system to each site and to reduce costs, the customer has the option of adding their own choice of biogas CHP generator, boiler, additional gas storage, gas upgrading and materials handing. 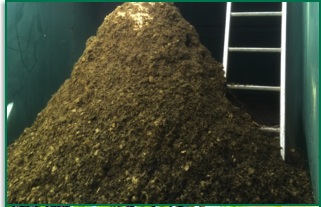 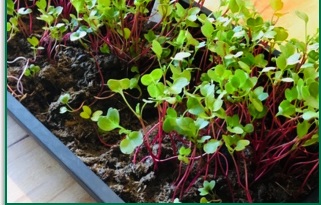 Fermen8® is produced during the process of the patented hybrid digestion. Current tests and plant germination and growth trials show this product could be as at least as valuable as the electricity from an AD plant.

Fermen8® is the fibre from the core of the digestion process, it is pasteurised (controlling pathogens, parasites and weed-seeds) and it contains natural slow release fertiliser whilst minimising ammonia emissions and water course pollution.

A Change of Diet 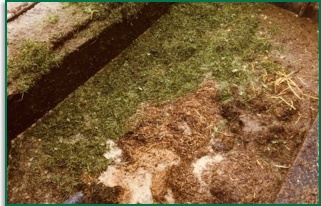 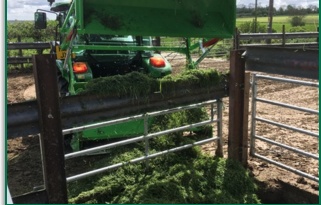 After running on farm animal slurry this winter, the digester is now running on a mixture of farm yard manure, old silage and toppings.

The toppings are mainly nettles, thistles and ragwort which are left by the pasture fed cows, cut and collected for the digester. Pasture toppings can give comparable biogas yields to "energy crops", at a much lower cost.

A complete change of feedstock can be done in a single day, thanks to the hybrid process. 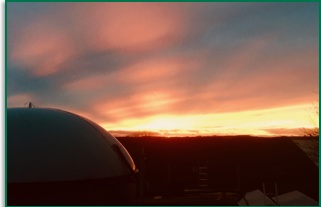 Studies and development work on a patented hybrid aerobic and anaerobic digester continue.

The aim is to enable family sized farms, communities, colleges etc to be self sufficient in renewable energy, fibre and natural fertiliser from a wider variety of feedstocks than used by conventional digesters. The whole system reduces ammonia emissions and enables carbon capture. 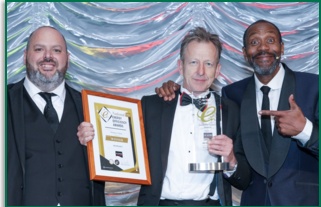 This follows on from the earlier award for the new hybrid aerobic and anaerobic digester, currently under test, to provide renewable energy and natural slow release fertiliser for a local dairy farm. This will enable it to be "off-grid", closed cycle in nutrients whilst carbon neutral.

It will provide electricity and heat for a dairy farm, enabling it to go "off-grid" and reducing the quantity of diesel fuel used in slurry spreading by having a much smaller amount of digested solids to spread. The natural fertiliser is stable, with a significant reduction in leaching to watercourses and airborne emissions.

The next stage is to bottle bio-methane (CNG) for use in heating, cooking and vehicles. Anaerobic digestion is complimentary to other renewable energy sources, such as wind, solar and micro-hydro.

The farm could meet all its energy needs, plus the surplus for the local community.

Many anaerobic digesters are temporarily shut down every 3 to 6 years so that inorganic sediments such as grit can be cleaned out. Normally this grit build up is hard to spot.

We can offer, through our partner companies, a longer term solution:

Thats the average rate of deposition of grit and other inorganic materials we have found in conventional anaerobic digesters.

Each year, this means 10% less space in the vessel for digestion, the biogas yield falls and with automatic feeding there is an increased risk of over feeding and process failure. Other potential problems are blockages, poor mixing and less heat transfer.

The average lifetime of a conventional digester, before shut-down and digging out the grit is perhaps 4 to 6 years.

With our patented process, this problem can be significantly reduced, even eliminated.

Note: Images on the right show one years worth of sandy deposits from a conventional digester, which are almost impossible to remove by mixing and pumping.

A new company to supply this small, yet important scale of anaerobic digesters will be announced later in 2015.

Licensing and technology exchange and licence for use of the Bioplex Process, in medium to large digesters, in countries bordering the Mediterranean Sea. Licence for Portugal starting in July 2015.

Trials using solid fuel made from the screened and dried digested solids. There is little or no nutrients in the fuel, these nutrients can be spread onto fields and gardens in liquid or solid form as a natural slow release fertiliser.

A second food waste treatment plant, built in 2009, whose biogas (final stage) digester has not had problems with grit and debris build up problems that can occur with conventional AD plant.

Note that digester vessels are transportable, with pipes and electrical connections plugged in.

The reception and first stage digester under construction. The Bioplex process is used in this 125 kW AD plant and will use a mixture of farm animal and horse stable manures and home grown energy crops, under rotation.

A Bioplex AD plant which treats food waste in accordance with Animal By-Products Regulations has now been in successful use for 5 years. This digester vessel originated from an earlier trial on the same site and is still working well.

Technology exchange and licence agreement for a manufacturing company to use the Bioplex Process in an EU country.

Second site using Portagesters to treat prison kitchen waste now operational. The food waste is digested, composted and screened - resulting in a good quality natural fertiliser and soil conditioner for on site use eg for gardens and within polytunnels.

The financial benefits are in the reduction or elimination of:

Portagester on trial in the Channel Islands. Many islands around the UK have high waste disposal costs and may need to buy in compost/fertiliser for its farms/horticulture. The Bioplex Process is ideal for local recycling, energy recovery and job creation.

Many islands have their own diesel fuelled generators for electricity generation. These could be converted to combined heat and power, to exchange heat for biogas from a nearby digester. Surplus heat could be used for heating of buildings, greenhouses and amenities.

This is the fourth Bioplex plant to comply. It fits neatly into an existing building, which has bunding and water catchment.

The trials showed that a small digester could convert kitchen/food waste within a small area on the site and produce a good fertiliser rich compost for the flower beds and lawns. The trailer can be towed around the resort to various restaurants, food shops and food waste collection bins. After digestion, the Portagester tips out the treated solids onto the composting pad and resumes the collection round. The complete cycle takes two to three days.

Roll on-off PG 4 Portagester® which can be moved and emptied using a standard hook load lorry. One PG 4 can treat 2,500 tonnes per year of food waste whilst producing a slow release natural fertiliser and biogas from the second-stage digester.

The Royal Welsh and Pembrokeshire Shows. The PG 3 Portagester® can treat up to 7 tonnes per batch every two days and is suitable for farm animal manure, grass and vegetable waste treatment.

PG 1 Portagester® and small second-stage digester delivered to South Dorset for trials on the treatment of organic wastes including household refuse.

PG 3 digester delivered to Westray, for use at an abattoir. Pictures show the digester dealing with boxes of spoilt vegetables.

Testing of one of the three PG 1 digesters built for HM Prisons kitchens.

The digested kitchen waste is added to lawn mower clippings in a garden composter, which accelerates the process with less odours and more natural fertiliser as a result.

Start of the development of the "kitchen top" range of digesters. The aim is to provide digesters, small enough to be used at home and in the garden, to produce a nutrient rich natural fertiliser that will accelerate and improve green waste composting e.g. lawn mower clippings.

Otter Rotters produce a natural fertiliser rich compost for use in a nearby commercial nursery.

Although the kitchen waste should be meat excluded, due to the risk of meat in the collected material, the process has been designed to meet the DEFRA's Animal By-Products Regulations (ABPR) standards.

Two PG 2 digesters and biogas digester have been installed to treat kitchen waste from 500 homes.

The Longstock Portagester®; is run to produce natural fertiliser compost for selling to local growers. Farm animal and horse stable manure is pasteurised, digested and composted.

The Portagester®; is an example of an anaerobic digester for DEFRA's Farming without Fossil Fuels project that looks at farming using home grown fuels and other renewable energy sources.

Bioplex Ltd is to embark upon the evaluation of a patented low cost conversion of weeping walls, used widely on dairy farms, to an Anaerobic Digestion system.  This will, in most cases, produce on-site energy and meet higher environmental standards.

A new 5,000 tonne per annum farm and food waste digester, built under licence from Bioplex Ltd, operating in Co. Durham as a working prototype.

A result of EU collaboration is this German Portagester, built under licence.

Copyright © 2004-2022 Bioplex Ltd. All Rights reserved.
Bioplex, Portagester and Fermen8 are registered trademarks in the UK.